The installation meeting of Unity Council of Thrice Illustrious Masters was held on Thursday 28th July at Beaconsfield. Twenty-nine Companions attended the meeting to witness V.Ill.Comp. Graham Seeman install V.Ill.Comp. Peter Hughes as his successor in the Chair of the Council. V.Ill.Comp. Peter then appointed and invested his officers, including Ill. Comp. Malcolm Summers as Deputy Master and Ill.Comp. Tim Weller as PCW. As is traditional in this Past Masters’ Council, the three Principals were representatives of the three provinces of the District: Oxfordshire, Berkshire and Buckinghamshire. 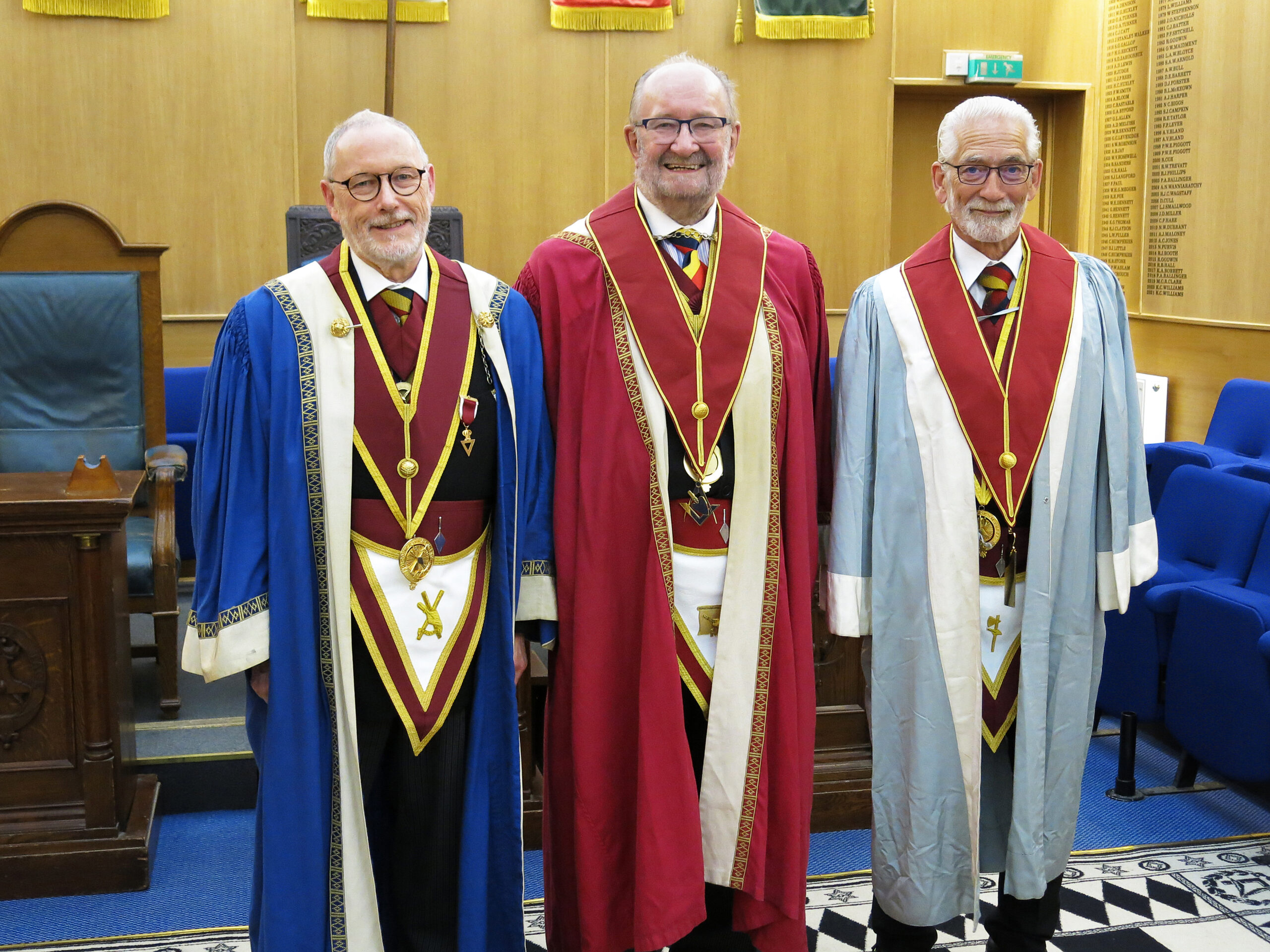 Preceding the installation, the Council conducted the Silver Trowel ceremony, when Ill.Comps. James Hilditch of Oxford Council and Andrew Stephens of Bekenesfelde Council were honoured with the degree in what all agreed was a fine ceremony, worked by a newly constituted team.

The new recipients of the Silver Trowel degree. 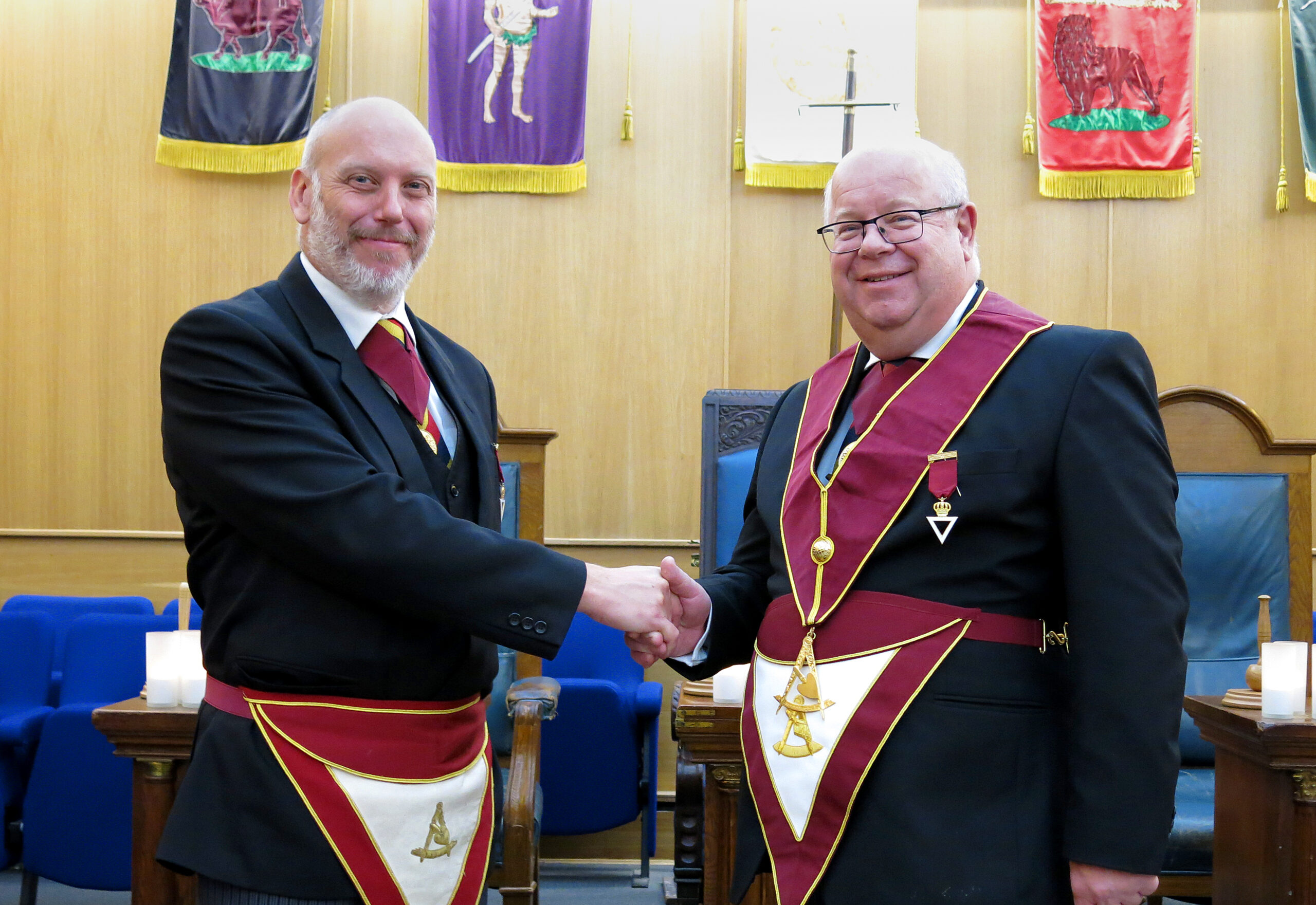 In a most impressive ceremony, Companion Spencer Swanson was promoted to the rank of  ‘Illustrious Companion’ when he was installed as TIM of Bekenesfelde Council by his predecessor, Ill.Comp. Paul Savage. 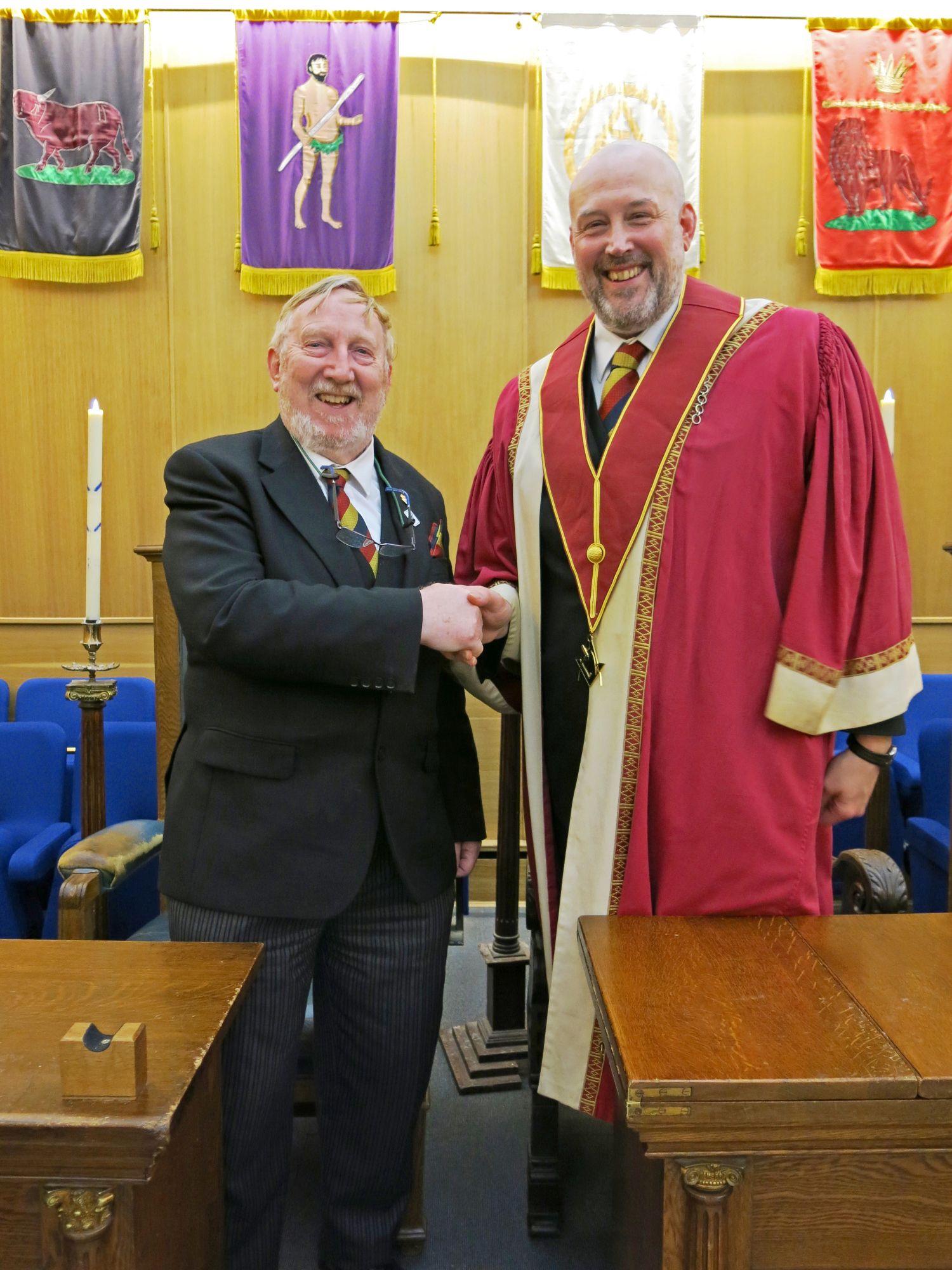 The Companions enjoyed an excellent Festive Board of Breaded Camembert, Lamb Shanks and Eton Mess, chosen by the new TIM, producing a very full and satisfied group of diners! 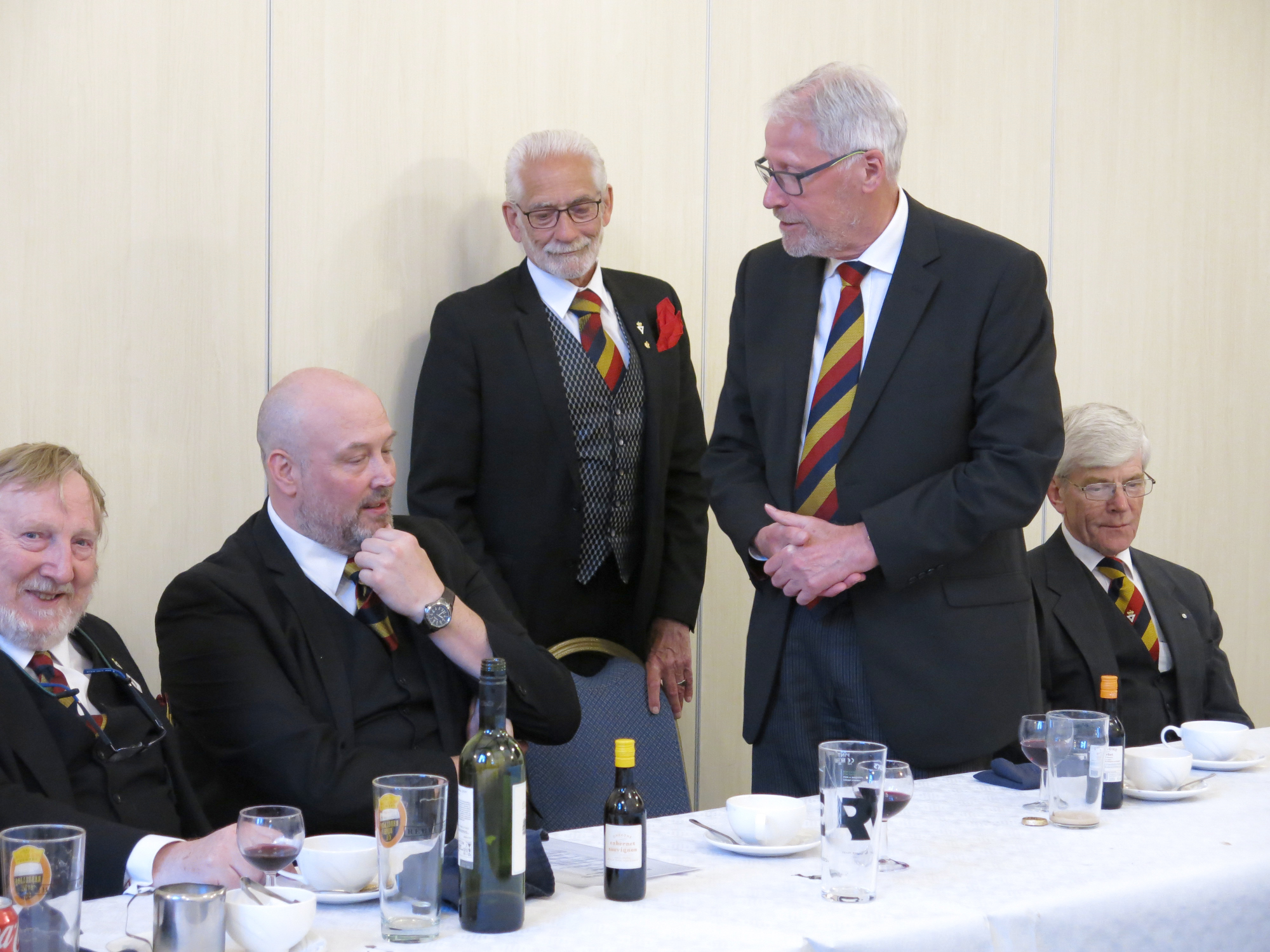 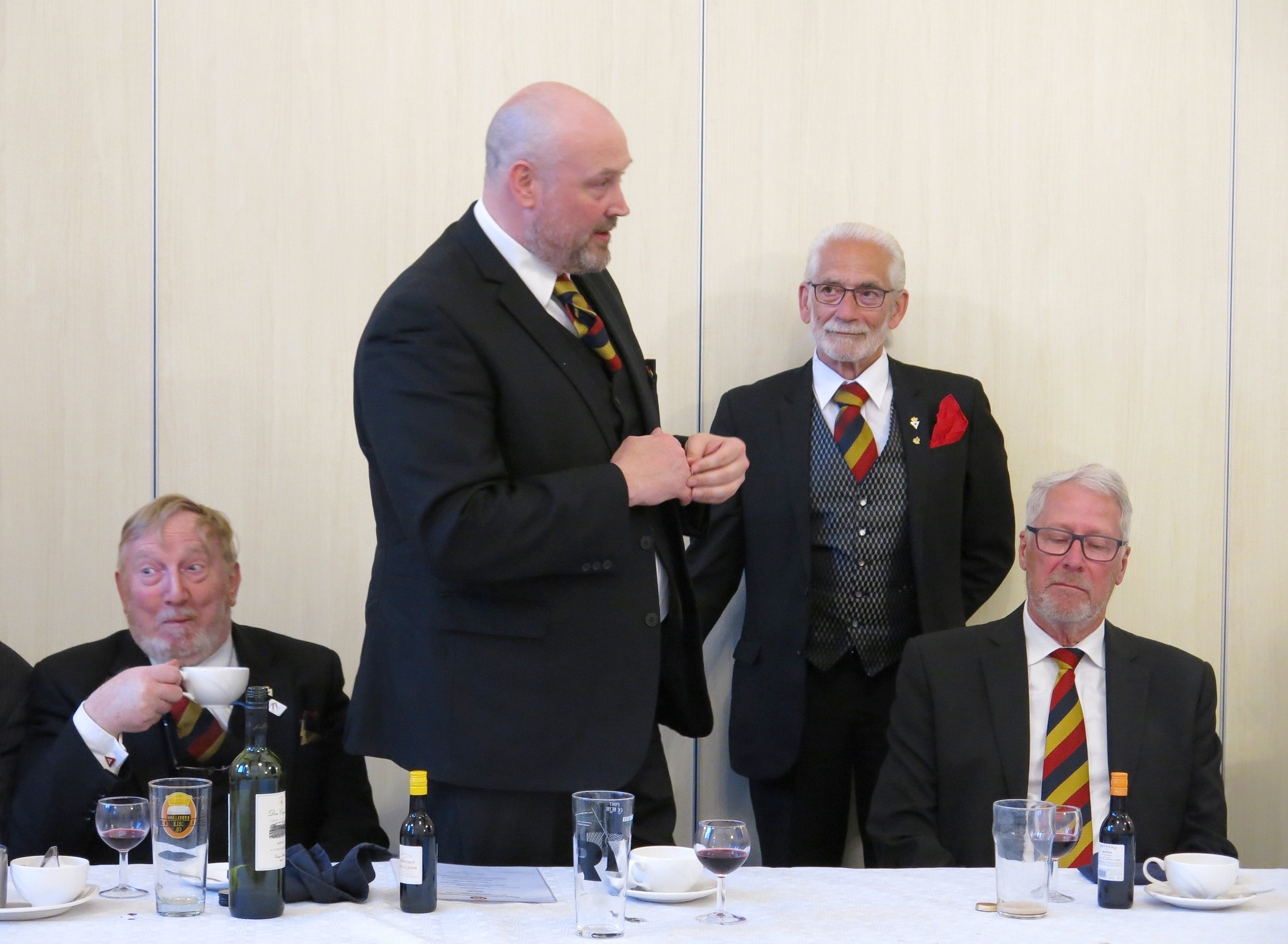 (something seems to have amused the DGM!)

On Saturday 26th February Oxford Council No. 105 of Royal and Select Masters held their 50th Anniversary Meeting.  The Council was consecrated on Wednesday 27th October 1971 by Most Illustrious Companion Dr. Arthur S. Hollins, the Grand Master of the Order, at Freemasons’ Hall, Oxford.

The ceremony of Most Excellent Master was worked with Very Illustrious Companion Phillip Purves, Deputy District Grand Master and the Council Director of Ceremonies, acting as Right Worshipful Master.  Companions Bernd Wegerhoff and Paul Buck were Received and Acknowledged as Most Excellent Masters and the History was delivered by Very Illustrious Companion Phillip Purves.

The companions were then treated to a brief history of Oxford Council given by Very Illustrious Companion Phillip Purves.  Phillip was warmly thanked for his splendid work in researching the history of the Council and delivering a fascinating talk.  Copies of the full printed history were then distributed to the companions. 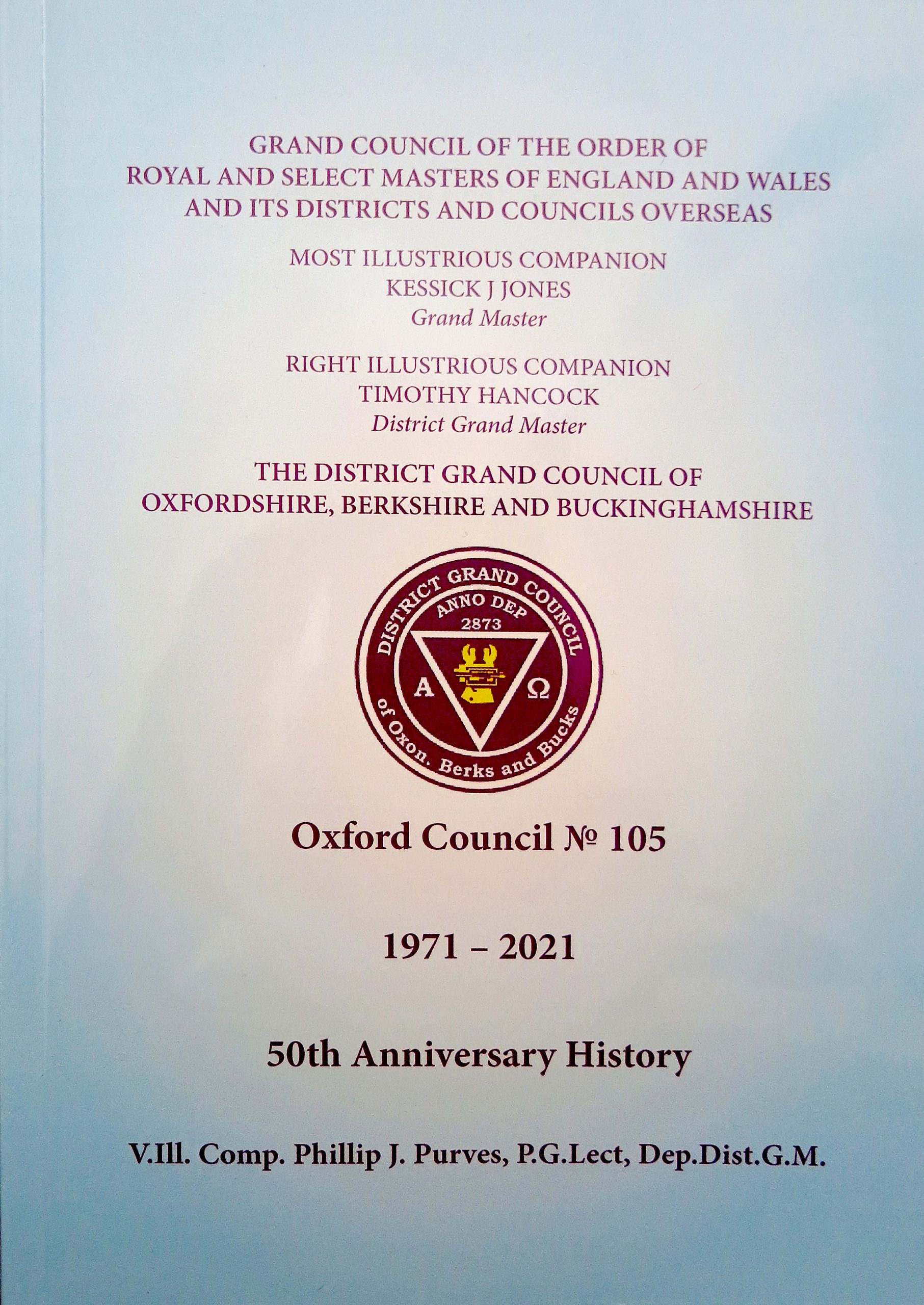 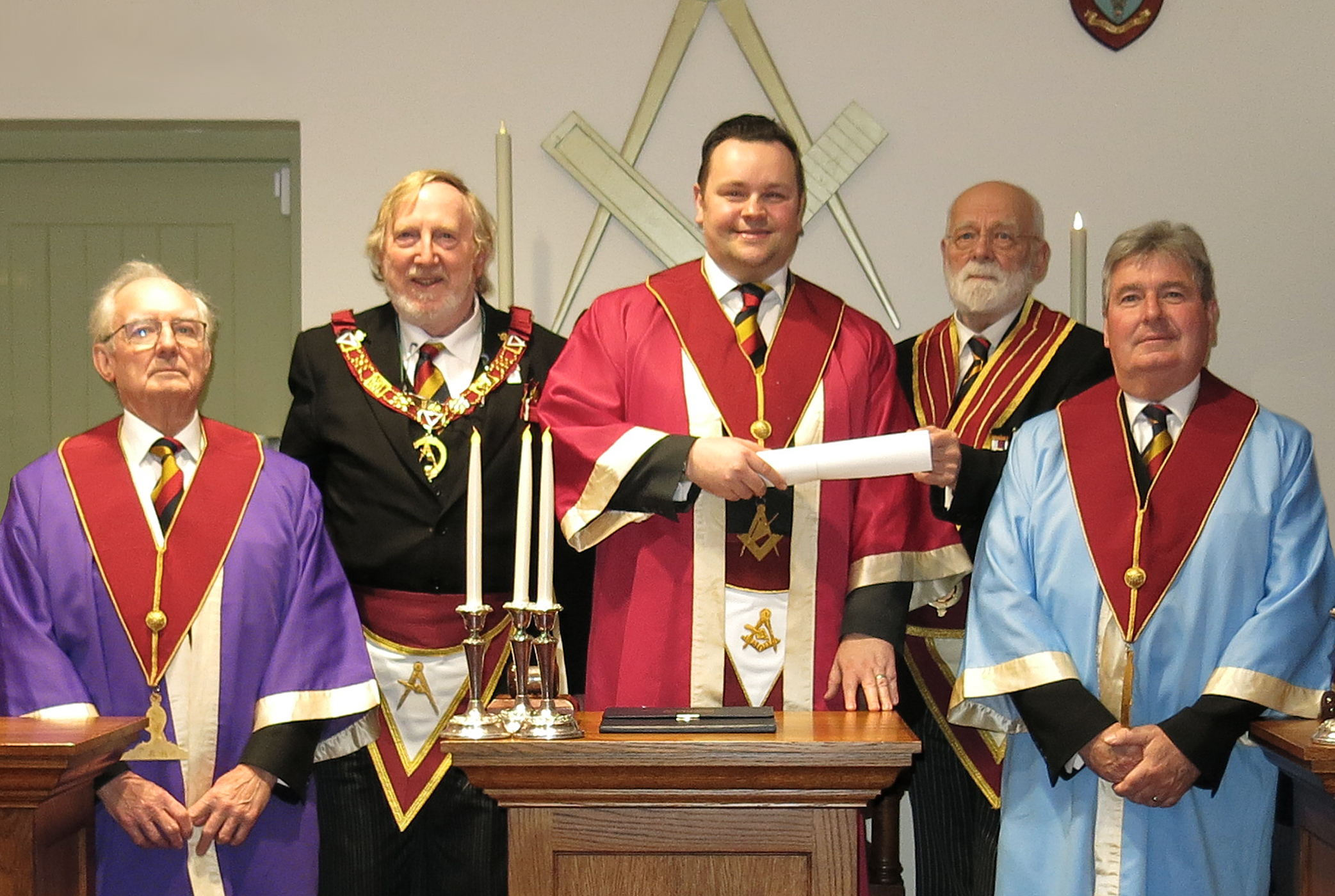 Following the remainder of the business the Council was closed and the companions retired to enjoy a convivial lunch together. 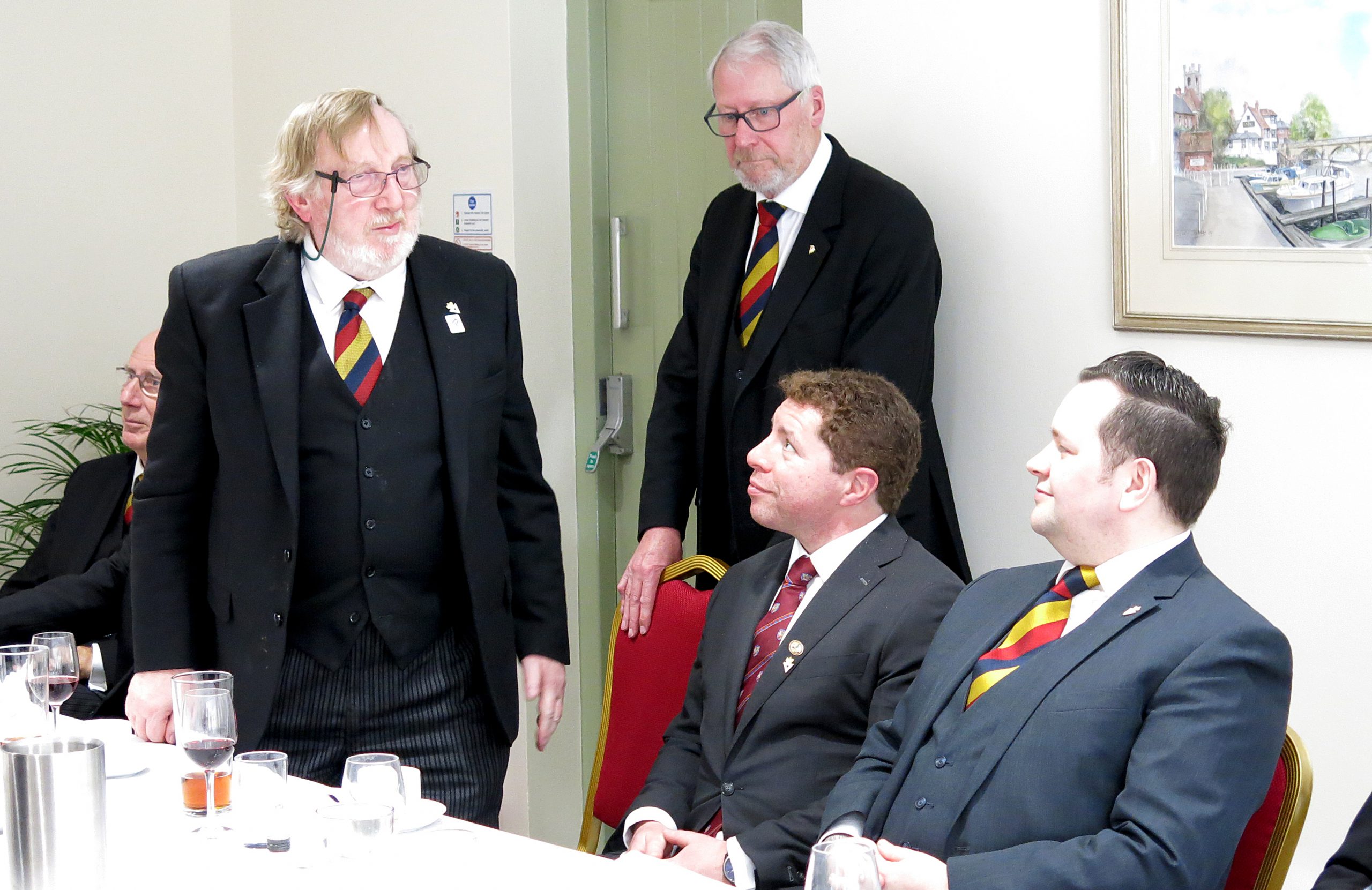 The R.Ill. District Grand Master responding to his toast. 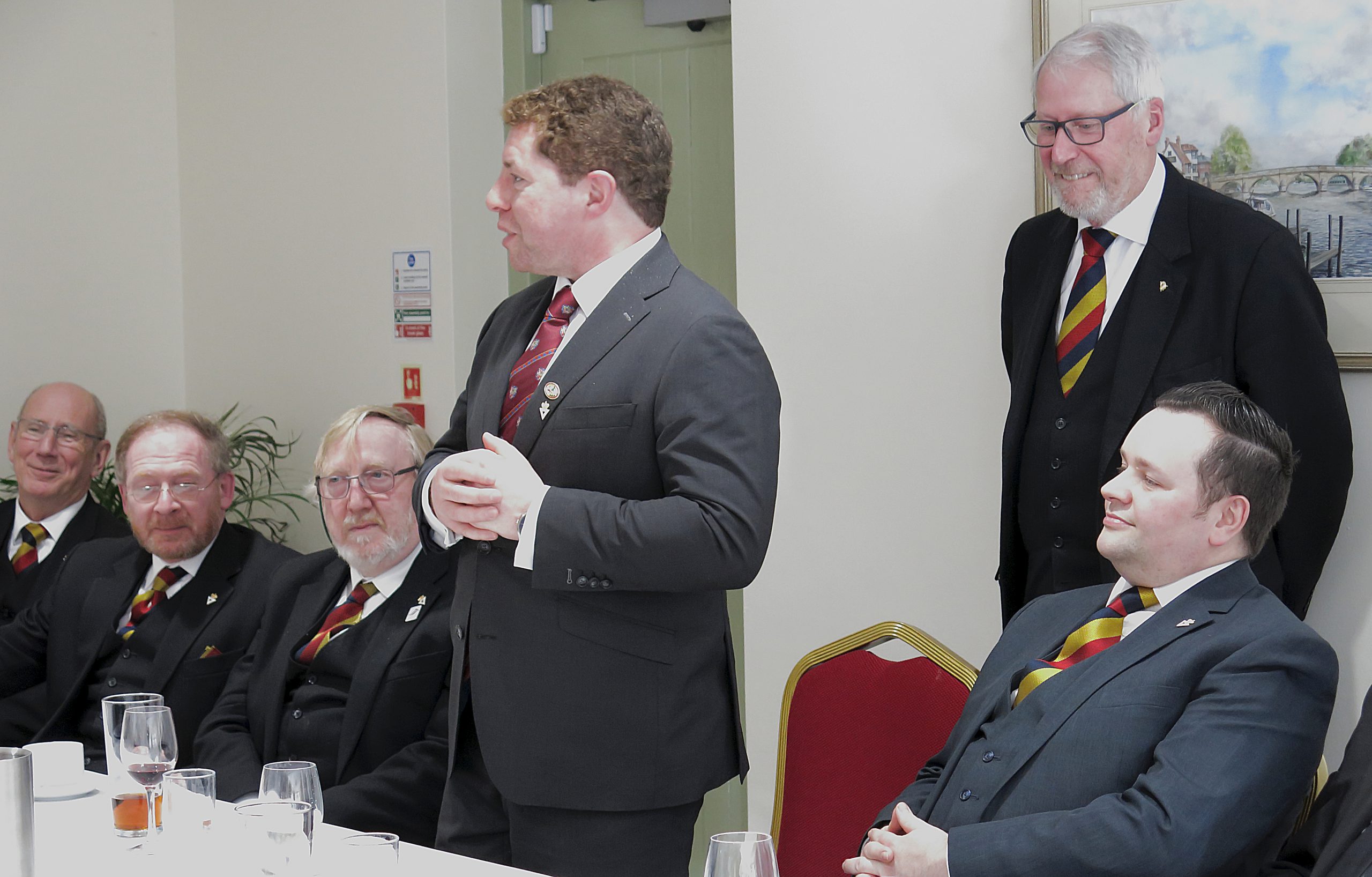 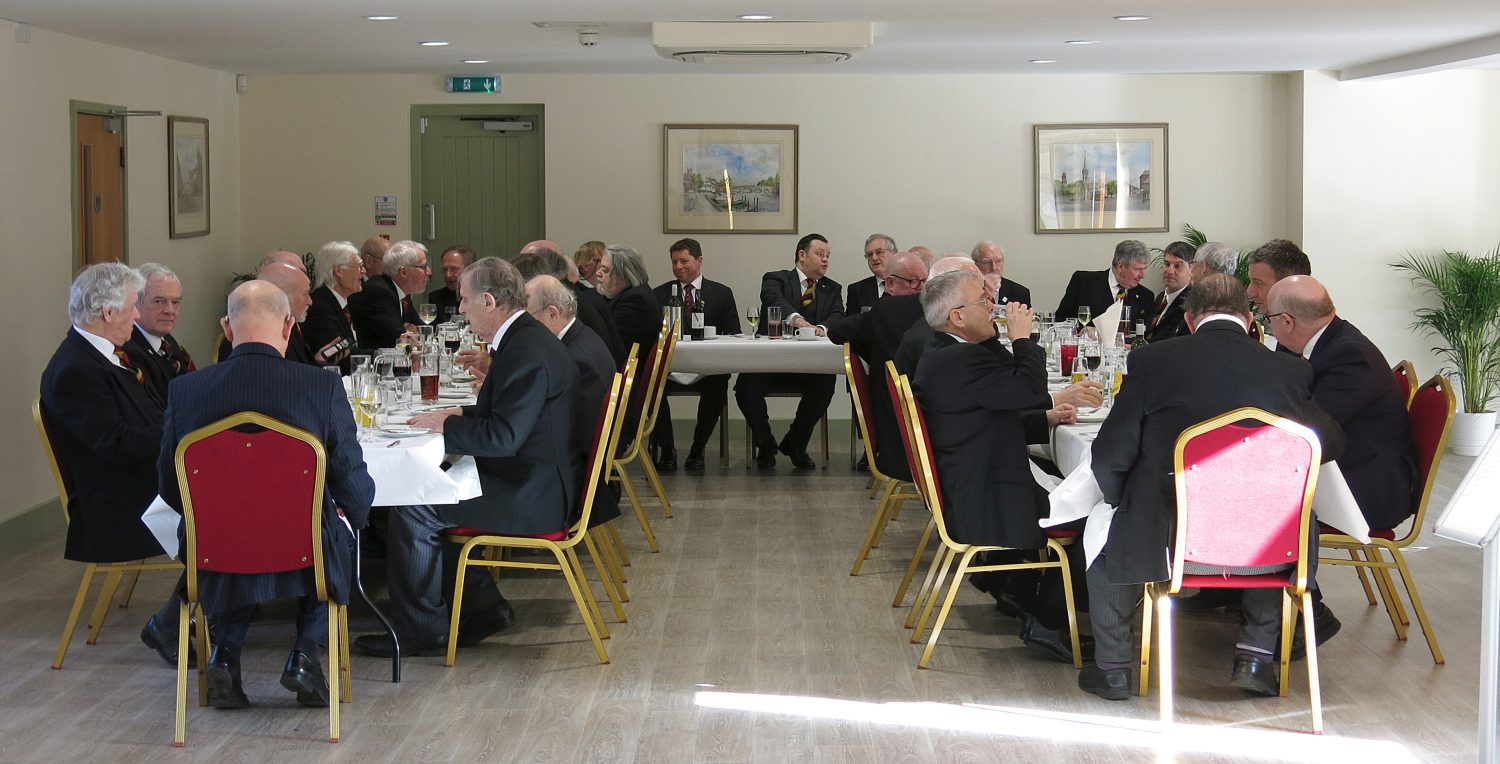 The Companions at lunch.

The District Grand PCW invested Ill. Comp. David Tremaine with his collarette as District Grand Lecturer.  David was appointed to this office in July 2020 but due to the pandemic the last two District Meetings had been online.

After the Council was closed the companions repaired to the Bell Hotel in the Market Square and there enjoyed the traditional carvery and each other’s company.

Meeting of the District Grand Council of Derbyshire on 5th February 2022.

The District of Derbyshire held their Annual District Meeting on Saturday 5th February at Freemasons’ Hall at Littleover, just outside Derby.  The premises were previously owned by Rolls Royce and development work on the Merlin engine was conducted there.

The meeting in 2021 had been a virtual District Meeting, and there was a spirit of ecstasy that the companions could now again meet in person.  The meeting proceeded like a smooth-running engine and the business included the obligating and investing of a new District Grand Principal Conductor of the Work, and an interesting report from R.Ill.Comp. Ryan Williams, the Grand Recorder.  He reminded the companions that despite the difficulties of the past two years that there is much to look forward to, and in particular that plans are being developed to celebrate in 2023 the 150th Anniversary of the formation of the Grand Council of Royal and Select Masters.

Oxon, Berks & Bucks were represented at the Derbyshire Meeting by R.Ill.Comp. Tim Hancock, V.Ill.Comp. Phillip Purves, and Ill. Comp. Paul Ackland-Snow, and all three found it to be a very worthwhile trip. 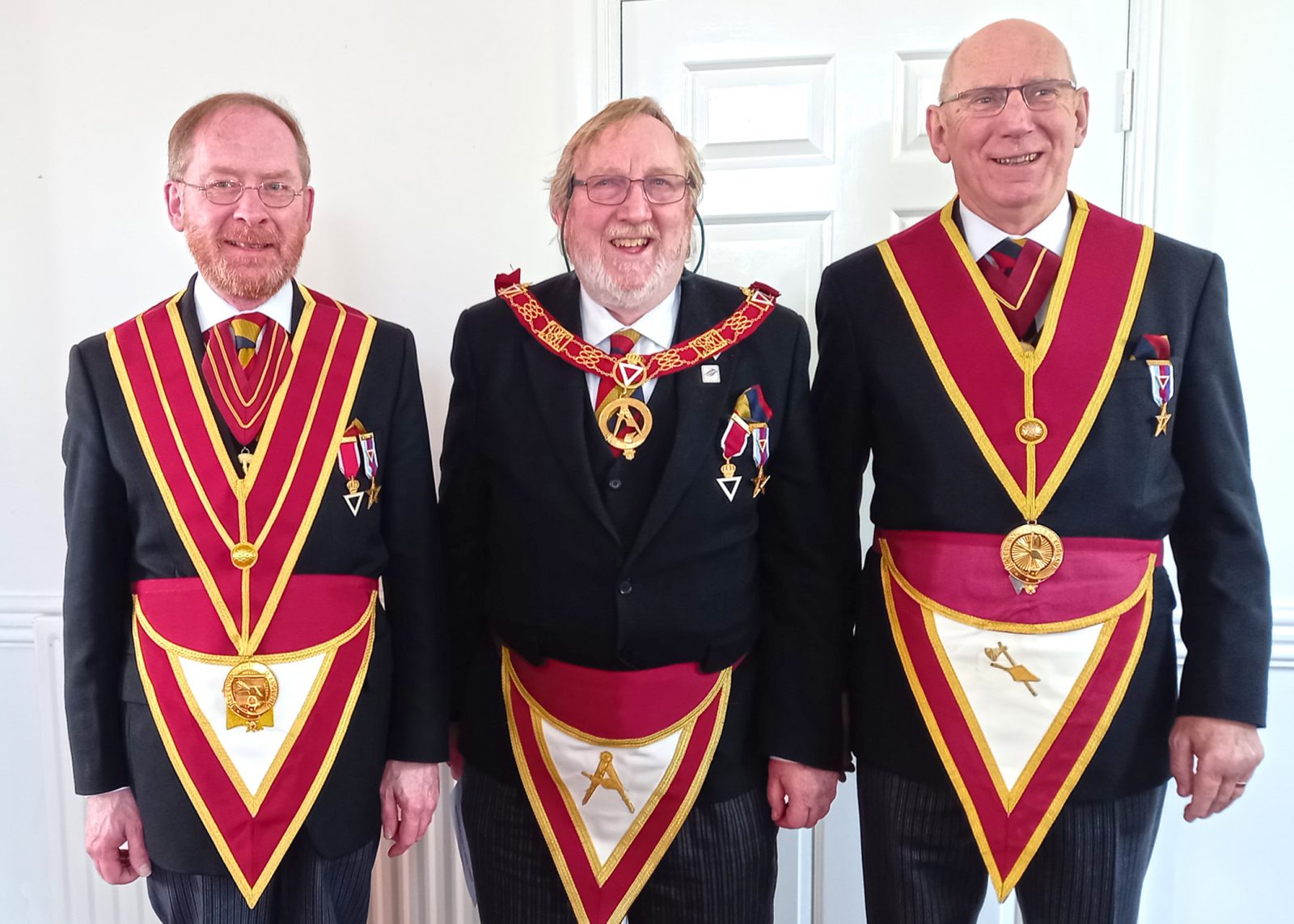 Meetings of Wantage and Unity Councils on 11th January 2022.

Wantage Council enjoyed an excellent meeting on 11th January, at which Comp. Kevin Dodd was Received and Acknowledged as a Most Excellent Master in a fine ceremony conducted by the TIM,  Ill. Comp. Terry Speight. The meeting was preceded by a meeting of Unity Council of Thrice Illustrious Masters, at which three Past Masters received the Degree of the Silver Trowel. Both Councils dined together in a most convivial atmosphere. 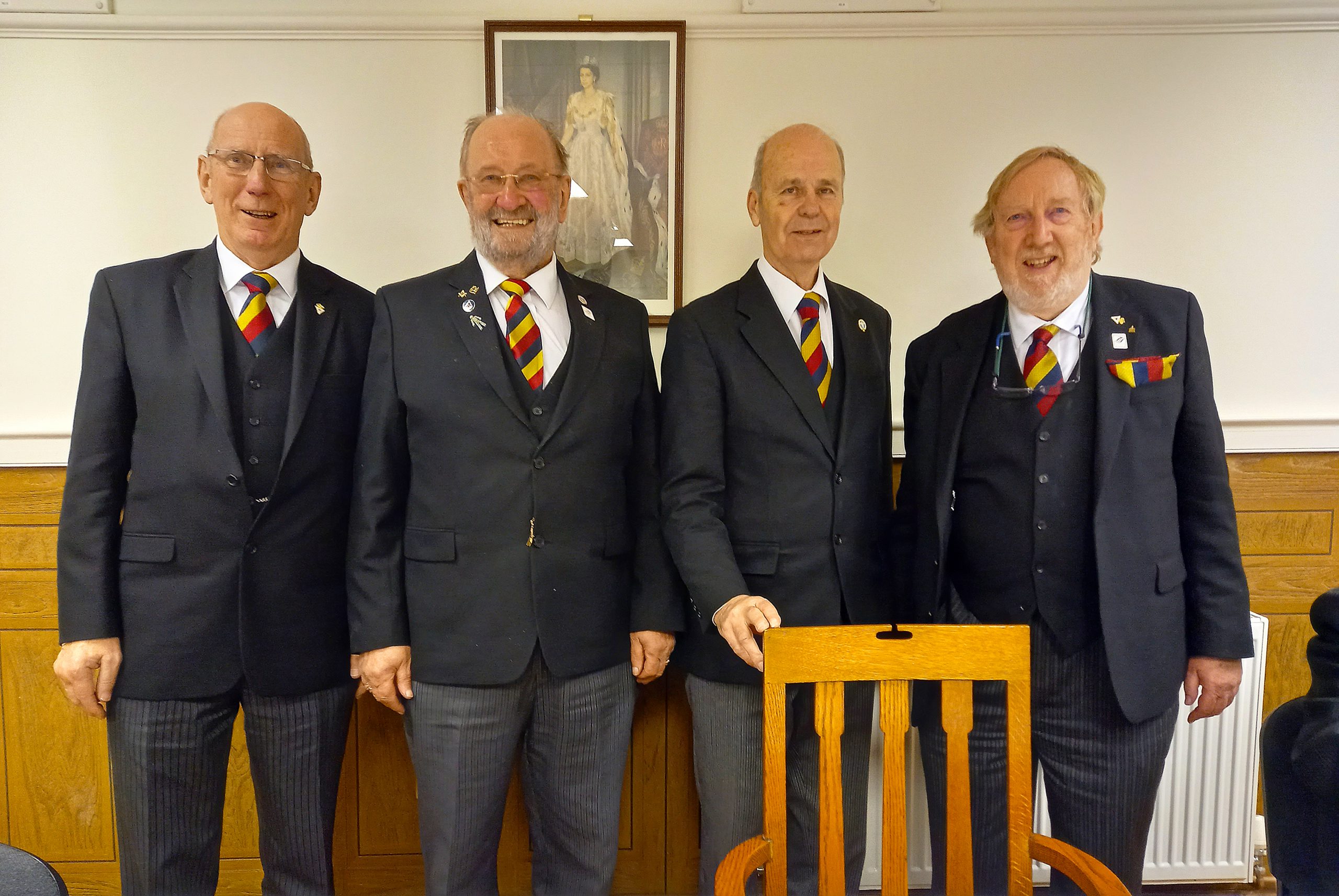 Bekenesfelde Council celebrated its first meeting since 2019 on the 9th December, when Ill. Comp. Paul Savage was installed as TIM by R. Ill. Comp. David Hunt in a very fine ceremony.

Prior to the business of the Council, the R. Ill. District Grand Master occupied the Chair to formally invest Ill. Comp. Paul Ackland-Snow as District Grand PCW – a ceremony that had, by necessity, been delayed for many months because of the Covid suspensions. The DGM was ably supported by the District Deputy Grand DC, Ill. Comp. Mark Ball, and the rest of the District Team throughout the investiture. 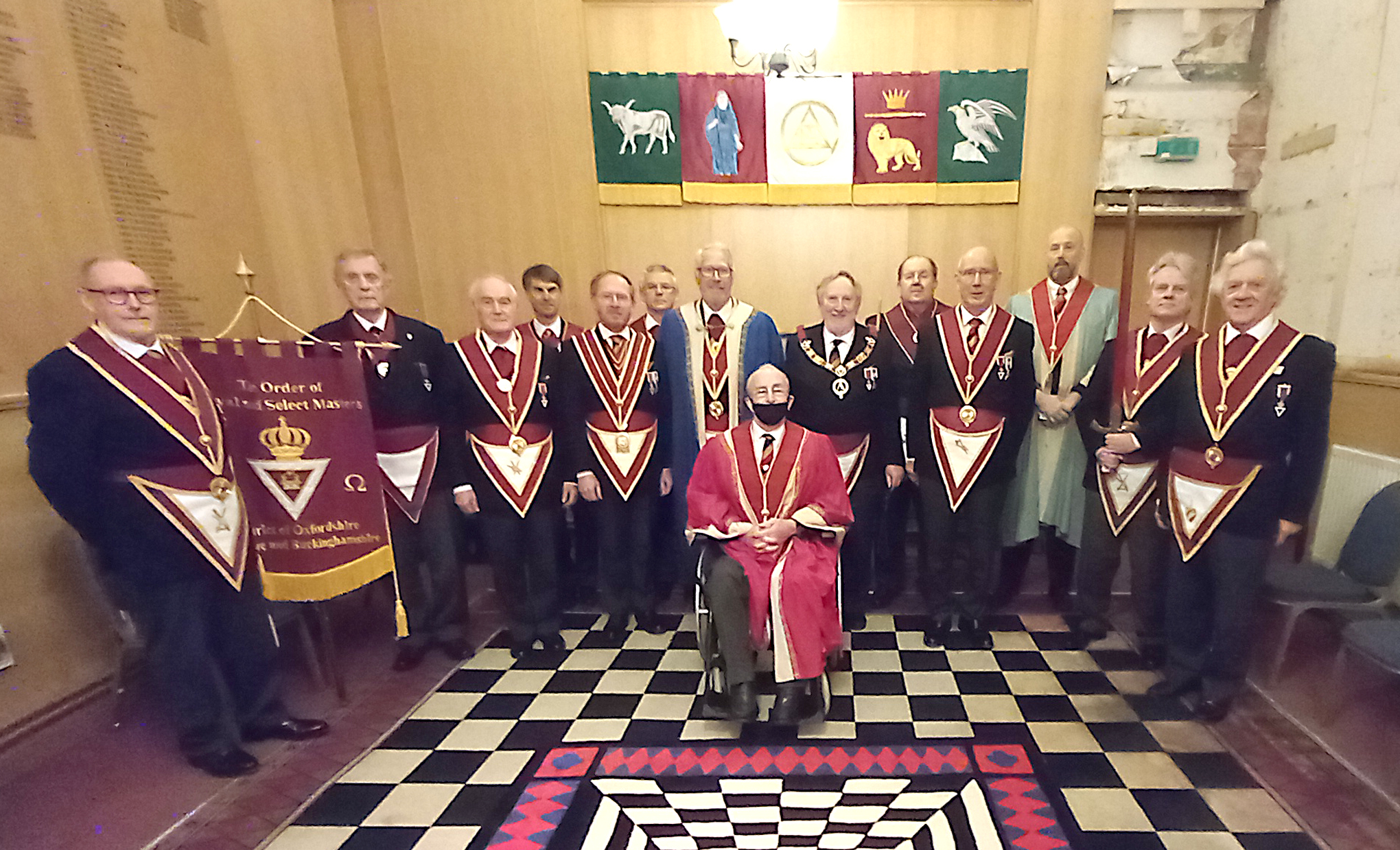 (face coverings were worn throughout the meeting, but briefly removed for the photo)

Thame Council celebrated the installation of Ill. Comp. Eugene Gratwohl on Saturday 21st August. Eugene was elected back in 2019, but his installation was delayed due to the Covid-19 suspensions. The Council was also delighted to Choose two new companions; Comp. Steve Adamek and Comp. John Sear, who were immediately promoted to Manciples! The ceremonies were shared between several Companions in what was a most pleasant return to the ritual after a two-year hiatus.

The Council was honoured by the presence of the Deputy District Grand Master and the District Grand Principal Conductor of the Work together with many other distinguished Companions. 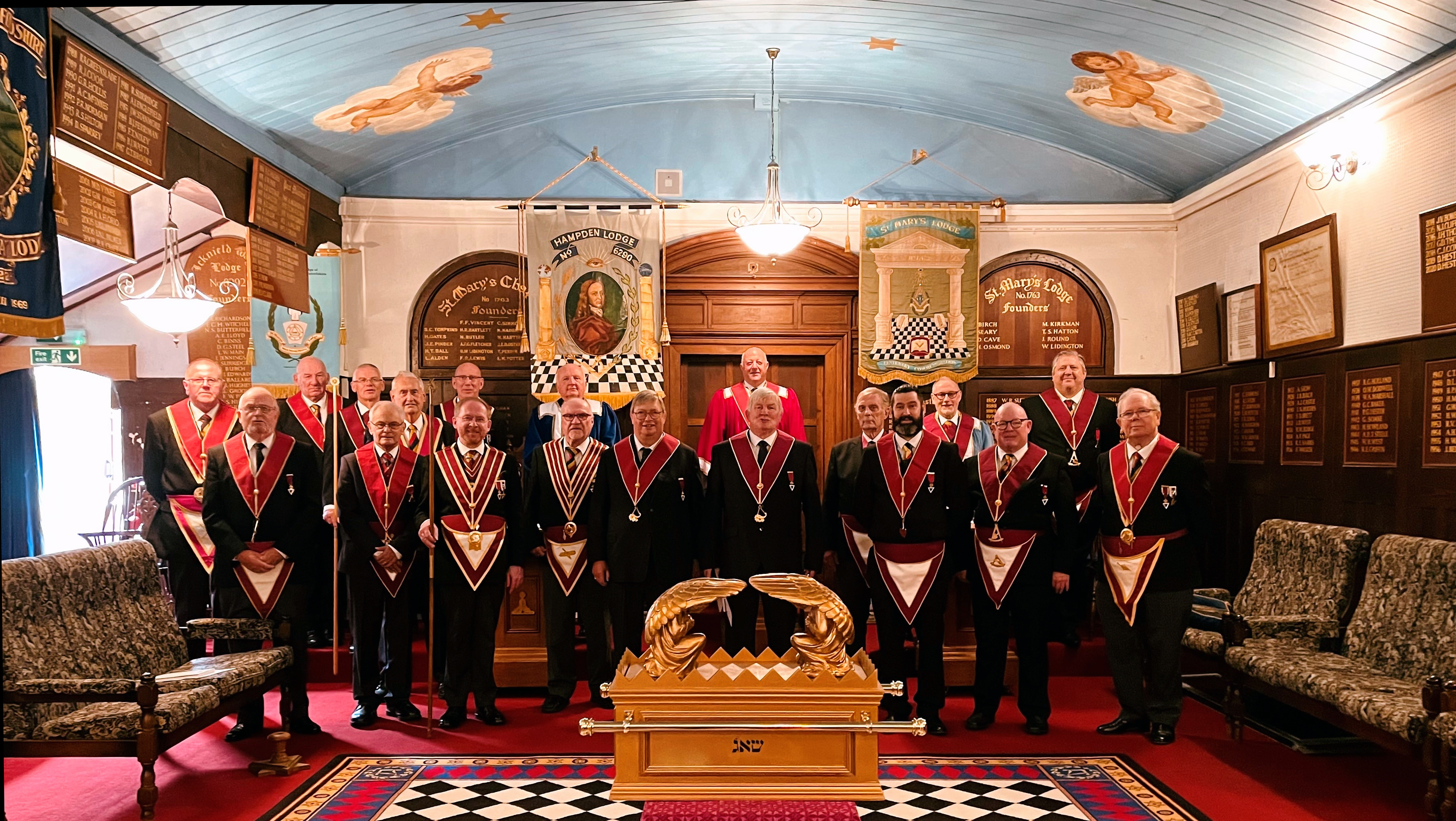 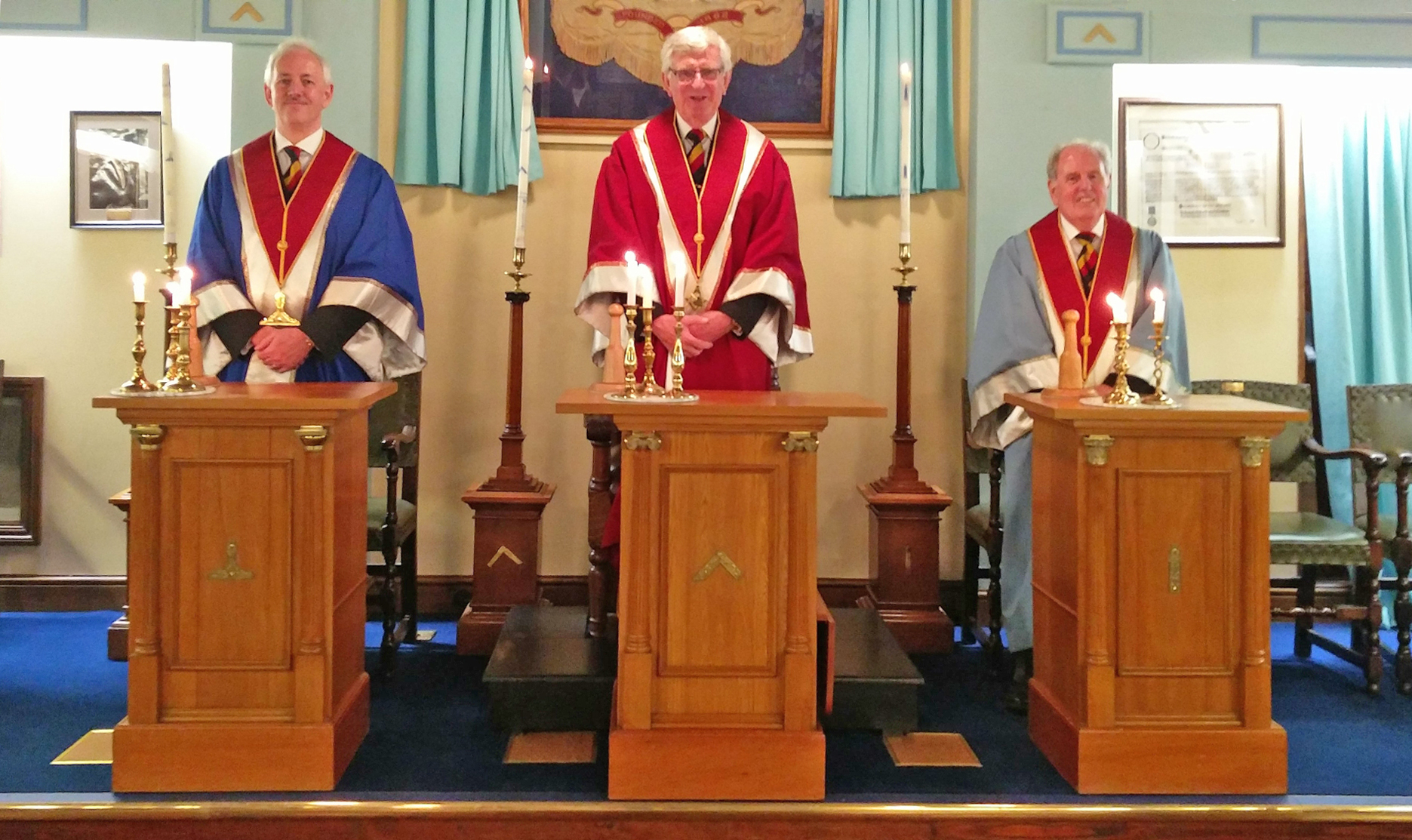 The Council was honoured with an official District Visit to mark the installation of Ill Comp James Hildtich, the Provincial Grand Master of the Craft and Grand Superintendent of the Royal Arch in Oxfordshire, as TIM. 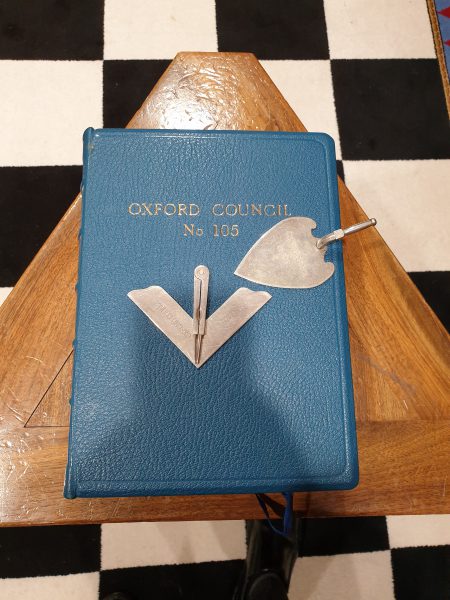 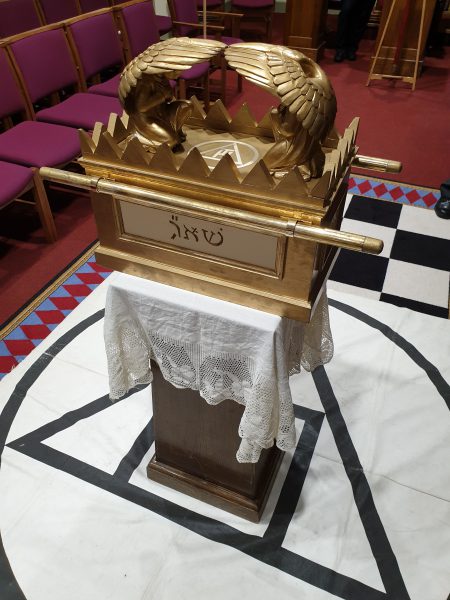 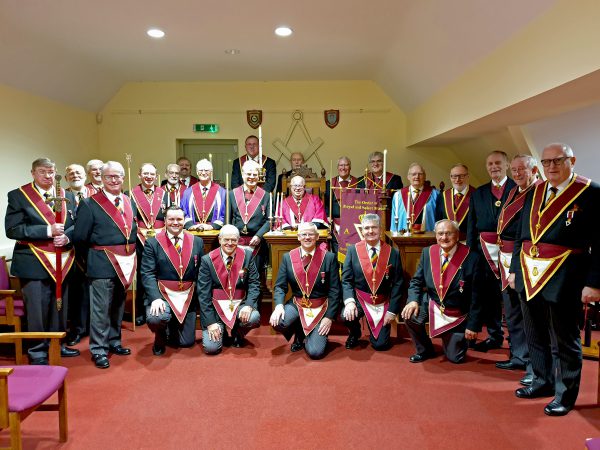